Of Prenups and Marriage: What You Need to Know About Spouses and Their Properties

Filipinos are a romantic lot. We love fantasizing about a happily ever after where the prince charming ends up with his princess.

The sanctity of marriage is absolute to us, which partly may be the reason we’re the only country in the world where divorce is not allowed. Many couples that I know of go to great lengths to avoid all matters that may affect the harmony of a marriage. One of these is the issue of money and, by extension, properties.

There’s nothing wrong about keeping the peace, of course. Who doesn’t want a marriage that’s nothing but pure marital bliss. However, this is not realistic. In the United Kingdom, for example, 42 percent of marriages end in divorce, according to their Office of National Statistics. Who knows how many Filipino couples end up separated or marriages annulled. But given our obsession with the querida subculture (as of this writing I counted at least four soap operas in which infidelity is the major theme), it’s fair to say that a lot.

Which brings us back to the question of money (and properties). How do married couples share properties acquired before and during marriage, and how are these divided when the marriage turns sour and ends?

To do this, it’s best to review what our laws prescribe. According to Ernesto Perez II, a real estate attorney and a member of the Muntinlupa Real Estate Board, there are two regimes that cover couples’ marital properties. One of which is the “conjugal partnership of gains,” which applies to marriages that took place before the Family Code of the Philippines took effect in 1988.

According to the conjugal partnership of gains regime, the couple’s properties will be like this:

Under this scenario, when the married couple gets estranged, one spouse can freely dispose of (sell, mortgage, lease, exchange, or donate) his or her properties he or she acquired before marriage, even without the consent of the other spouse. If the property in question was acquired during marriage, however, notarized written consent from both spouses is still needed.

However, if a couple was married on August 3, 1988, up to present, their properties will no longer be governed by the law of conjugal property but instead by the provisions of the Family Code of the Philippines signed by then-president Corazon Aquino.

Under the law, in the absence of a “marriage settlement” (typically a prenuptial agreement or prenup), a married couple’s properties acquired before and during marriage will automatically become co-owned by the couple under the property regime called absolute community of property.

Under this regime, the couple’s properties will look like this:

The absolute community of property regime is considered the default property regime in the absence of a marriage settlement or prenup. It treats properties acquired by the spouses during their marriage as jointly owned, which means that the spouses are considered as co-owners of all properties they bring into the marriage, as well as those they acquired during the marriage.

What If the Couple Decides to Keep Them Separated Before They Get Married?

Perhaps because of the Family Code, prenuptial agreements or prenups are slowly becoming more common, observes Atty. Melencio Sta. Maria, a professor of family relations law and obligations at the Ateneo de Manila School of Law.

More couples have become more aware of their rights, including their right to keep separated their properties and assets acquired before marriage. 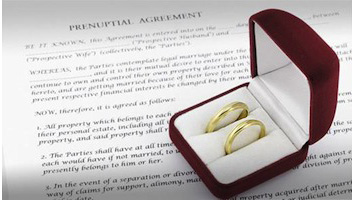 Prenups are also advantageous for couples who prior to marriage already have numerous properties that they would prefer to keep in their name, says Atty. Perez. In addition, they’re also appropriate if one of the spouses has a child from a previous marriage so that the child is cared for properly in the future.

But thanks to our obsession to Hollywood and many celebrities’ messy divorce settlements, prenups have gotten a bit of a bad press among many Filipinos. The very act of entering into one is seen by many Filipinos as unromantic and may do more harm than good to a couple’s relationship.

Atty. Sta. Maria says this shouldn’t be the case. A prenup shouldn’t be looked at as something that shows a lack of trust between spouses, or to create animosity between them. It is very useful not only in managing their real properties, but also in the case where each of them were running separate businesses prior to marriage.

For example, if before marriage the husband runs a construction supplies business and wants to maintain sole ownership to the said business during marriage, he can do so by stipulating it in the prenup. This way, he can enter into contracts, apply for a loan to scale up operations, or sell the business even without the consent of his wife. The wife can do the same if, say, she runs an interior decorating business prior to marriage.

Hence, a prenup not only protects assets but having one in place also allows couples to maintain the flexibility of the businesses they individually run, said Atty. Sta. Maria.

If there is separation of property, the couples’ individual businesses are not restricted because they each can proceed with their respective business without having to seek the consent of the other spouse in every transaction.

In the absence of a prenup, both husband and wife become co-administrators of each of their properties. Although there are advantages to this—such as combined resources for their businesses, shared expertise, and spreading the risk—it also reduces the flexibility as one cannot dispose of the property without the consent of the other. For example, if one tries to sell land without the consent of the other, that sale would be considered void.

This can become problematic, especially when looked at from the buyer’s standpoint. According to Atty. Perez, legally, all marital properties that are intended for sale should have the consent of the spouse.

To be absolutely sure that the seller is protected, he or she should require that both spouses to be physically present during the execution of the deed of sale.

One common misconception about prenups is that it is used to completely shield a person’s properties from his or her spouse, similar to what we usually see in movies in which the rich parents force their future son-in-law to sign one in order to protect the family fortune.

However, unlike in the United States, the Philippines’ succession and inheritance laws give protection to compulsory heirs, one of whom is the spouse, said Atty. Chester Ogsimer. This means that no amount of legal hocus focus in the prenup can deprive a spouse of his or her inheritance. Atty. Sta. Maria concurs:

Spouses, with or without a prenup, remain heirs of each other, the same way that their children are their rightful heirs.

But to prevent tension or feelings of mistrust from developing later on, Atty. Sta. Maria advises couples to talk about having a prenup ideally at the earliest stage of the relationship or engagement, and the couple should be sincere and honest when disclosing their assets and debts.

And in order for a prenup to be valid, it must be executed before the marriage, should be in writing, and, in most cases, done in the presence of lawyers. The latter can help prevent awkward situations from arising.

Furthermore, the prenup must be registered in the local civil registry where the marriage contract is recorded and also in the proper Register of Deeds where the pieces of property of the future spouses are located in order to bind third parties.

Although there is nothing inherently wrong with Filipinos’ aversion with prenups, it doesn’t hurt to be ready and have one in place either. We’re all for couples staying married “till death do them part,” but life isn’t always a fairy tale, as the saying goes. Who knows what would happen 10 or 15 years into a marriage—even the most perfect one can lead to annulment.

But what counts is the married couple continuously nurturing their relationship with love, respect, openness, and trust. Once this is fulfilled, the presence or absence of a prenuptial agreement no longer matters.

This Is the High Life: 7 Luxurious Residential Developments